Skip to content
Posted in eLearning By michaelgPosted on January 7, 2019Tagged eLearning 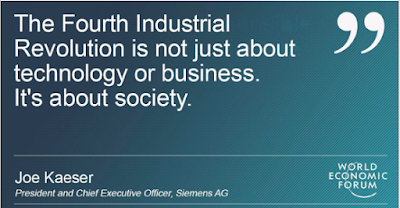 A key message I’m seeing already at the start of 2019 is that the ‘next industrial revolution’ will be about people. Joe Kaeser wrote a recent article for the World Economic Forum on the subject, and it has been echoed in publications by several others who have their fingers on the pulse.

Although I’m not convinced that the term ‘revolution’ is apt – most technological developments feature long processes of evolution rather than sudden disruption or revolution – the argument that humans are at the centre of change must be taken seriously.

Another example comes from Richard Gerver (a former headteacher, and now author and speaker) who posted: 2019 has to be the year we spend our time celebrating what we have in common: A year of collaboration, catalysing a new human renaissance. Gerver refers to his Edsurge article The Next Education Renaissance is Human, not Technological, in which he argues pretty much the same for education that Kaeser has said for business.

The message is simple: the world is rapidly changing, and businesses, schools and universities need to change to keep pace. We can heap as much (or as little) technology into our classrooms and offices as we like, but in the end, it is the people who have always made the difference.

As they stand on the verge of the third decade of this century, teachers will realise that all of the students in our schools were born in the 21st Century. In a year or two, businesses will be welcoming new graduate employees who have no personal experience of the 20th Century. And yet, in many cases, they will enter a workplace that remains rooted in 20th Century practices.

The UK government’s recent decision to ban the purchase of new fax machines in hospitals is a classic example of a very large organisation struggling to throw off the bonds of a bygone age. Such a decision should have been implemented more than a decade ago, but promoting change is not easy. It’s difficult to overcome entrenched ideas that are no longer feasible or credible in the current age of advances. The technology is not at fault. The people in the organisations need to make the decisions to move forward or stagnate.

Just as social value should be the benchmark of a company’s performance, so in our education systems, indicators of success should focus how well we can develop great human beings. Can we focus more on life skills than on grades? Can we develop children’s abilities to solve problems and think creatively above doing well in exams? Almost all of the world’s most serious problems such as greed, hate, anger, jealousy and fear have human origins, so we will need very human abilities to be able to counter, and eventually overcome them. We need a lot more humanity in our businesses and education systems. Here’s to a very human future.

2019: Year of human renaissance? by Steve Wheeler was written in Plymouth, England and is licensed under a Creative Commons Attribution-NonCommercial-ShareAlike 3.0 Unported License.

Posted by Steve Wheeler from Learning with e’s