(As this article was waiting for publishing, we learned that Conquer the Gauntlet will only be having 1 event in 2021. Once again, I want to thank Conquer the Gauntlet for the amazing opportunity to host and design the course for what could be the last Dallas-area CTG… for awhile, at least.)

We know the routine: show up on race day, check in, get to the start corral, run, laugh, have fun, hang out with friends, and drive home looking forward to the next race. This year, my family and I learned a lot more! We got to experience putting together an OCR from start to finish.

We live in a rural area in Texas, surrounded by some acreage owned by my father-in-law. After the cancellation of Conquer the Gauntlet’s Dallas race in May, I mused how fun it would be to have it here. I casually mentioned it to my FIL one day, and he seemed open to the idea. I pitched the idea to Stephen Mainprize, CTG owner, but whether there was even going to be a Dallas race was uncertain. One night in April he called and asked me to check calendar dates and talk to the landowner about a possible Dallas event. It turned out their usual Dallas venue couldn’t hold the event on the rescheduled date so Conquer the Gauntlet needed a place to race.

Lesson 1) While race companies coordinating their race dates is nice for us participants, they’re at the mercy of the venue.

Knowing the landowner personally, and the tenant who works cattle on the land, I had the task of explaining what an OCR would involve. Concerns they had included: What is an obstacle race? How much land area would be needed? Will they clean up afterwards? One thing made clear was that the tenant, who has the legal lease to the venue, shall not have his ranch operation hindered by the race. Shortly after the details were agreed on by the land owner, tenant, and the Mainprizes – i.e. clean up, which parts of the land couldn’t be used – contracts were signed and the date announced.

Lesson 2) Venues usually conduct other business when a race isn’t going on. Often that business is the venue’s “bread-and-butter” and takes priority.

As summer progressed, my wife and I started considering where the course would run. Where do you put a festival area? Where are people going to park? What if it rains a lot? What’s the best use of terrain for a trail? Google Earth became a great tool for sketching out possible course routes. We also walked miles scouting out the property. By August we had a good idea of the trail and started clearing the course in September. Usually this is done by 1-2 people on the build crew. Knowing that CTG had a build crew of 2 this season, we decided to do a lot of the work. After running 12 Conquer the Gauntlets I had a competent feel for what they needed. 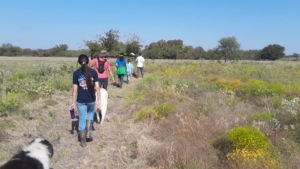 Heading out to clear trail with the family.

September came and we started clearing the trail. I’d walk ahead with a chainsaw or pole-saw to get low hanging limbs out of the way. The family would come behind clearing the brush and moving large limbs. Sometimes I’d “ruck” hike with a sprayer of herbicide to knock out the poison ivy. Other times I hiked the trail with a weed eater.

Lesson 3) Very rarely will a venue have a trail laid out. Some of the wooded parts may be impenetrable with briars, undergrowth, etc. You also cannot always get a mower to every part of the trail.

What was CTG doing during all of this? Putting on events – races in Iowa, Tulsa, and Little Rock. By this time texts and emails with the race owners became regular. At one point I quizzed Stephen about the trail, expectations, etc. Finally he said, “AC, I’ll let you take care of it.”

Lesson 4) While I’m training for a race on my calendar, the race company is having a few race days somewhere else.

The next question my wife and I came across: Where will the obstacles go? We had some terrain, but it was hard to access with a truck. We didn’t want all of the obstacles in a few acres of flat pasture and the rest of the race be a trail run. After walking the trail (and sometimes doing my training runs on it) we determined where obstacles could go. In many cases that meant clearing more vegetation. For about half of them we determined a good site and the race director chose which obstacle would go there.

Lesson 5) Sometime obstacles end up where they do in the course due to ease of setup/tear-down, terrain slope, visual appeal, or other logistical reasons.

The end of September (3 weeks from the race) were spent making final touches to the trail. There’s plenty of water to take advantage of, so we moved some trails to do that. My son and I also started mowing the festival area, parking, driveway to the parking, and obstacle sites – obstacles sites which involve a lot of mowing in circles to make a taper-in approach to the obstacle for lines, and a taper-out for the exit. Our backs were pretty sore after bouncing on pasture that was mottled with cow hoof craters.

Lesson 6) While it would be nice to have a smooth trail with no cow hoof craters, there’s no practical way to smooth them out. The only solution would be remove the cattle for a year – see Lesson #2.

Ten days from race day the CTG Build Crew arrived, and the semi arrived later that night. The first half of the day was spent getting tools and equipment ready, and driving  the crew around to see the venue. The next day we, along with more volunteers, unloaded the obstacles from the semi-trailer. 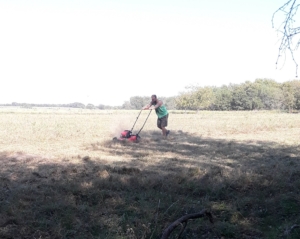 Stephen mowing the area for Slackline. 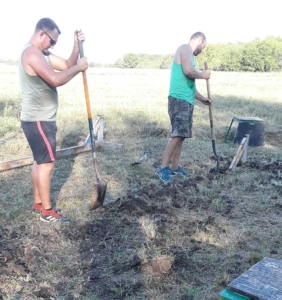 Burying the frames for Slackline.

The next 8 days were busy. Load obstacle parts onto trailer, drive to site, set up and make race ready, repeat. Some obstacles had to wait until we rented a boom forklift. Cargo net is heavy, and the rigs utilize steel pipes. Slackline involved digging into the hard clay ground. Each day about 4-5 obstacles would be set up, then the rest of the day would be spent flagging, final mowing, and checking the trail. While the CTG build crew often does build with 2 people, I acted as the third build person. Being a go-fer on the ground meant they could focus on assembly and not getting off the ladder to get bolts, tools, and parts.

Friday – the day before race day! Friday was the festival set-up day. A few volunteers came out and helped position tents, set up the start wall, Continuum pit fence, mark off parking, and set up tables. Water stations and additional signs were put out. Basically everything you see in the festival area came out of the truck the day before. By mid-afternoon it was safe to say the entire venue was ready for race day. Having volunteers help during this part is important. There are a lot of little details that need to be worked out.

It’s race day! For staff and volunteers that means setting out shirts, medals, raising the pop-up tents, and getting everything ready for the first wave. I got to run around with Christina “HB” Armstrong as she provided live coverage for Mud Run Guide, chasing the elite leaders around the course. As the day went on, and the crowd dwindled, the only people left on the course were the last Continuum runners. Piece by piece the festival area came down and was loaded back up. By evening, the only sign of a race that morning were port-a-potties, and obstacles throughout the course. 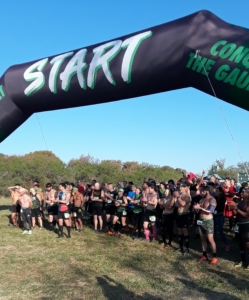 The elite heat is about to start!

The race isn’t over on race day. Sunday and Monday at first light, the build crew was out there tearing down obstacles, loading them back up on the trailer, and taking them to the semi-trailer to be loaded up. Water stations, kids’ course, signs, and course flags were collected. Unfortunately we also had to make sure peoples’ discarded old shoes, muddy socks, gel packets, and water bottles were picked up. Three days after the race is semi-loading day. While everyone else is resuming training for the next one, recovering, and otherwise getting back to routine, the build crew is loading up to leave. Piles of disassembled obstacles are all over the ground and now it’s a game of Tetris to fit it back in.

Lesson 7) Due to the lack of volunteer availability, the race sometimes will employ hired labor found on Craigslist or from the community just to help carry the piles of obstacles to the trailer. 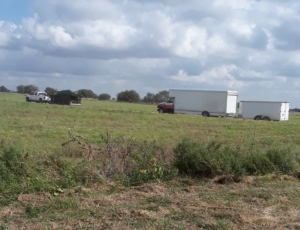 CTG heads back to Tulsa.

By lunchtime, thanks to some extra hands, we had the entire race loaded back into the semi-trailer, flatbed, U-haul, and a pickup. Goodbyes were said, hugs were given, and the best OCR ever rolled down the road. As I write this one week after the race, the trailer is still parked, waiting to be picked up. It’ll get hitched up and be taken directly to the next race in Wichita, Kansas.

If you can volunteer during a race build you will see a side of the race few participants even realize. You will leave the experience appreciating the race company and the course even more. I encourage everyone to volunteer, especially during build. It is a lot work and a lot of fun!

Lesson 8) I’ve often pictured a race having an office with about 10-20 staff. Conquer the Gauntlet has a full time staff of 2 people, and 1-2 seasonal build crew. When I’m not getting an email response or social media reply right away, I’ll be more understanding.

As I walk around a few days later, the trail is worn. I see shoe prints in the mud. Mowed patches where obstacles stood. Bare dirt where people kept trying Pegatron. I see where athletes pushed themselves and people had an unforgettable experience – some for the first time. I recall firing up the chainsaw on the first day of clearing and my kids helping. For one day of an epic event, it was all worth it. 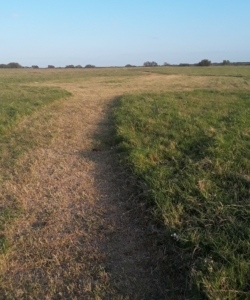 This was where Tarzan Rig stood.

Many thanks go out to Conquer the Gauntlet owners Stephen and Courtney Mainprize for entrusting my family and I to pull off the Dallas event. And to my family for chipping in to get ready. 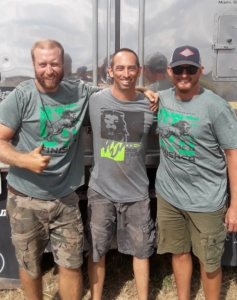 8 Lessons I Learned While Hosting an OCR