I was on a phone conversation and was asked whether I compared my clients against others in the business to help them figure out where they’re at. E.g. do I offer my partners the chance to benchmark. And after a bit of thought, I said that no, I didn’t, and explained why. Moreover, they found my answer intriguing, so I thought I’d share it with you. 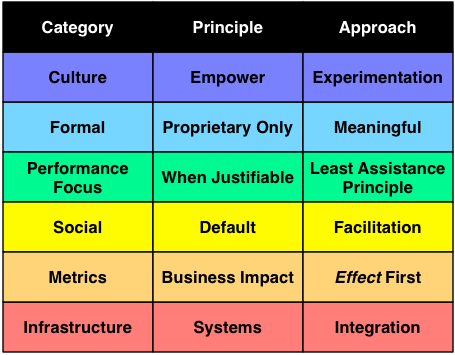 In fact, in the Revolution book, I created such a benchmark.  Using my performance ecosystem model, I took the six fundamental elements and elaborated them. The first core element I documented is a learning culture. That’s accompanied by the approach to formal learning, looking at your instructional design and delivery. Then you move to performance focus, how you’re supporting performance in the world. We move on to social, how you’re facilitating informal learning and innovation. The next step is how you measure what you’re doing. Finally, there’s your infrastructure, how you’re creating the ecosystem environment. For each here I have a principle and an approach.

What I’ve done in the benchmarking instrument is take each of these and extend them. So, for each element broke it into two components, as there are nuances. And, for each, I proposed four levels of maturity:

Thus, rather than benchmarking yourself against others, you have a principled approach with which to measure yourself. This instrument is fully elaborated in the Revolutionize L&D book, and goes into detail on each of the twelve rows.

And that was my response to the query. As a person, on principle you’re not supposed to compare yourself to others, but to your own progress. How to set your benchmarks? Against formal criteria. The same is true for organizations. I’ve tried to make a scrutable framework, the Revolution Field Guide, so to speak. So, please, look to best principles, not practices, and evaluate yourself similarly.