Some weeks back, I posted about surprise. That is, a new model that says that that our brains work to minimize surprise. We learn so as not to be wrong. And that made sense in one way, but left another gap. Another article explains (well, partly; the mathematics are more than I want to wade into) further, and that gives me a new handle on thinking about designing transformative experiences. It’s about the value of exploration to accompany surprise.

The problem with the original story of us just minimizing surprise is that this leads to another inference. Why wouldn’t we want to just hang in a dark warm room?  The notion of minimizing surprise did explain people who don’t seem keen to learn, but many of us are. And, as Raph Koster told us in A Theory of Fun, the drive to play games seems to be learning! We want exploration, and the outcomes aren’t certain. This is in conflict.

The new article posits that there’s another factor, the expectation of value. We also want the optimal outcome. The theory says that we’ll be willing to try several relatively equal predicted value outcomes to learn which to choose in the future (if I’ve understood the article correctly). So we will explore even under uncertainty if there’s a benefit to learning.

This doesn’t quite explain things to me. I think it’s missing some emotional aspect.  Why would we do things like try out Escape Rooms or The Void (as I’ve done with colleagues)?  There’s no real outcome, except perhaps to know about such experiences. But horror movies or thrillers? All we know is that we’ll have our emotions raised and then settled. But maybe that fits into a good outcome. 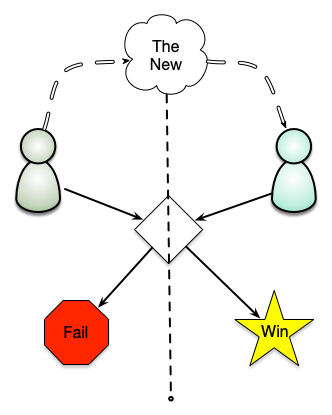 Still, this gives me a new handle. When I was preparing the Learning Experience Design workshop I gave at Learning Solutions last month, I was talking about ensuring surprise. That is, the learning experience should make learners aware that they didn’t know what the outcome would be. But I knew, and suggested, that there had to be more. They had to care about the outcome. And now we have the hook.

They care about the outcome, because it’ll be a higher value situation once they do!  If we do this right, we let them know that they care about the outcome, and they can’t do it now (either they know already, or we have them fail). Then, we can offer them the path to achieve this outcome. If they explore, they’ll learn? If we’ve got a truly meaningful outcome (you’ll now be able to do X) that they truly care about (you do want to be able to do X), you’re now set with emotionally ready learners. Cognitive science models suggest that this should work!  🙂

To turn it around. the point is that you should create a goal that they should desire, and then demonstrate that they don’t already know it. It’s simplistic, but I think it’s part of creating a transformative experience, one where they are not just ready for the outcome, but eager. And I think that’s desirable.  What do you think?