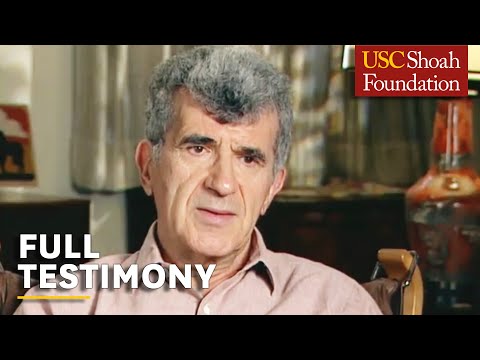 Sigmund Tobias was born in 1932 in Berlin, Germany. Sigmund is a Jewish Holocaust survivor, distinguished author, and research professor in Educational & Counseling Psychology. Sigmund’s notable works include "Strange Haven: A Jewish Childhood in Wartime Shanghai," and he has appeared (as himself) in documentaries "Harbor from the Holocaust" and "Shanghai Ghetto."

In his USC Shoah Foundation testimony, Sigmund reflects on his childhood, his experiences during WWII, and his post-war life. Sigmund is a survivor of the Shanghai Jewish ghetto. In 1938, when he was six years old, he and his parents fled Nazi Germany and sailed to Shanghai, one of the only places in the world Jews could escape to without a visa. They lived there, battling food shortages, overcrowding, and disease until the end of the war.

After the war, Sigmund immigrated to the United States, and became a professor and scholar of Educational Psychology. He recorded his testimony for USC Shoah Foundation’s Visual History Archive in 1997, and wrote a memoir about his experiences. Sigmund has been published nearly 100 times, and has been awarded $1.5 million in grants and contracts. Today, he is Eminent Research Professor at SUNY Albany.