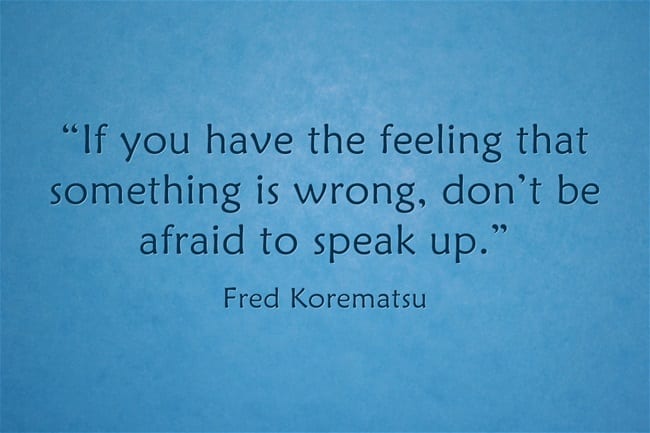 Every January 30th is officially Fred Korematsu Day in California. Here’s some background on it from YES Magazine:

In 1942, 23 year-old shipyard welder Fred Korematsu refused to join over 120,000 West Coast Japanese Americans who were rounded up and taken to incarceration camps under President Franklin D. Roosevelt’s Executive Order No. 9066. While Korematsu’s family was at the Topaz incarceration camp in the Utah desert, Korematsu was appealing his conviction. In 1944, the Supreme Court voted in a 6-3 decision against Korematsu, claiming the incarceration was justified for military reasons. It wasn’t until Nov. 10, 1983 that his conviction was overturned.

Fred Korematsu continued to speak up for civil rights throughout his life. He believed that “If you have the feeling that something is wrong, don’t be afraid to speak up.” That message remains alive in the mission and teachings of the Fred T. Korematsu Institute for Civil Rights and Education. In 2010, the state of California established January 30 as Fred Korematsu Day.

You can find many related resources at The Best Resources On Japanese-American Internment In World War II.