My 2020 OCR training came to an abrupt halt November 14th Saturday morning.  The weather was perfect.  All sun.  No clouds.  Cool breeze coming off the river.  Stunning views of the Jersey City and its landmark Colgate Building and clock, Lower Manhattan skyline, Ellis Island, the Statue of Liberty, and the Atlantic Highlands.  What could possibly go wrong?

Not a darn thing.  Elvi Guzman pulled off a late-season City Challenge Race.  This humble race director managed to host an event in the middle of what has been an otherwise disastrous year for OCR.  I caught up with him about two hours before the elite waves took off.  He was so happy to see this race happen despite so many things that could have stopped it.  He fought hard to offer this opportunity for athletes like me who’ve been training all season, hoping for just one chance to get on a course.

Sixty-nine elites took that opportunity and Jason Tavares (M) and Aliyah Emas (F) took top honors.  Two-hundred and ninety-four open class runners lined up afterwards to tackle eighteen obstacles over 3.1 miles at Liberty State Park.  And that’s where I came in.  I’m an old-timer in OCR going back to 2012.  For years I placed top 10% AG.  After my ACL surgery in 2018, I vowed to come back strong and podium in 2020.  I consistently finished top 10 AG in 2019 and felt I was ready.  I only needed one thing.

More speed.  If you’ve been following me on Mud Run Guide you’ll know that journey started with Dennis Welch’s Endurance Project.  From there, Richard Diaz’s clinic.  And finally, my son Aaron, who is studying Exercise Science in college.  The first two guys fixed my mechanics so I stopped getting injured.  My son put together the training plan.

All the while, Elvi followed me on social media where I posted about all this training.  When he announced the race about two months ago, I jumped right on it.  Training ramped up.  He called me to welcome me (I was a first-timer to City Challenge) and tpld me a bit about what to expect.  Although circumstances seriously capped the number of runners, the types of obstacles allowed, and the amount of time given to set up and tear down the course (they only had 24 hours!), Elvi pulled some magic out of his warehouse to set up a great course.  It was definitely a runner’s course. 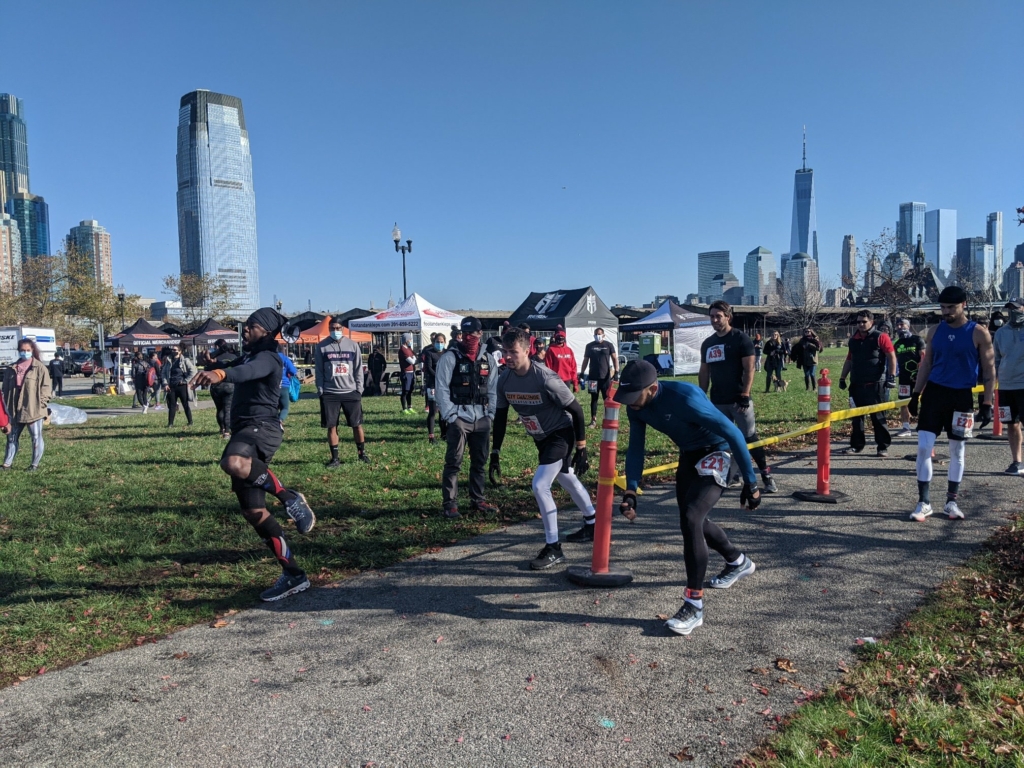 And that’s exactly the kind of race my son trained me for.  When it came time to toe the line, Justin T. Manning emceed the crowd.  Pylons were spaced six feet apart.  Runners stood side-by-side the pylons and the line snaked back as far as it needed to for each wave.  Justin released us two at a time while keeping the others both entertained and well-spaced.  Everyone was really cool about the whole thing. 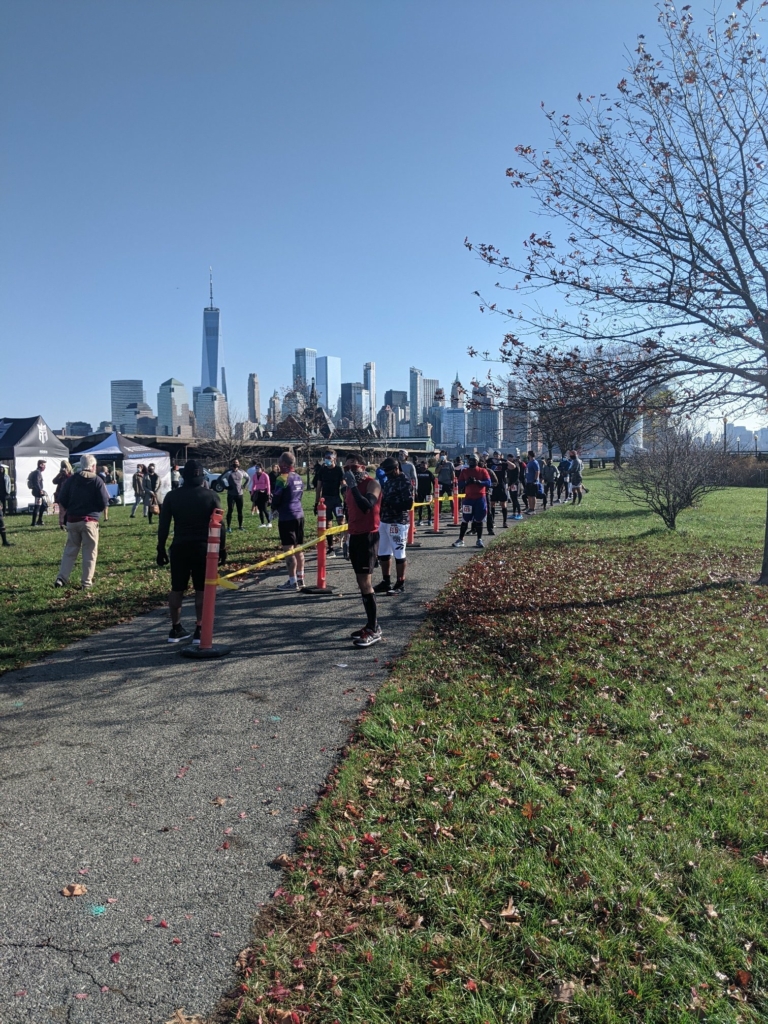 Then, with Justin booming out “C – I – T – Y and GO!” we were off.  City Challenge race has the look and feel of the urban area we all know so well in this part of the country.  But when coupled with OCR, it’s very cool.  We jumped over cop cars and yellow taxis.  We leapt over police barricade fencing.  We parkoured up, over, and around park objects all while spectators sat at benches, walked their dogs, or jogged around watching us do crazy things with the terrain that otherwise is meant for contemplative views of Lady Liberty and the great immigration of the early twentieth century. 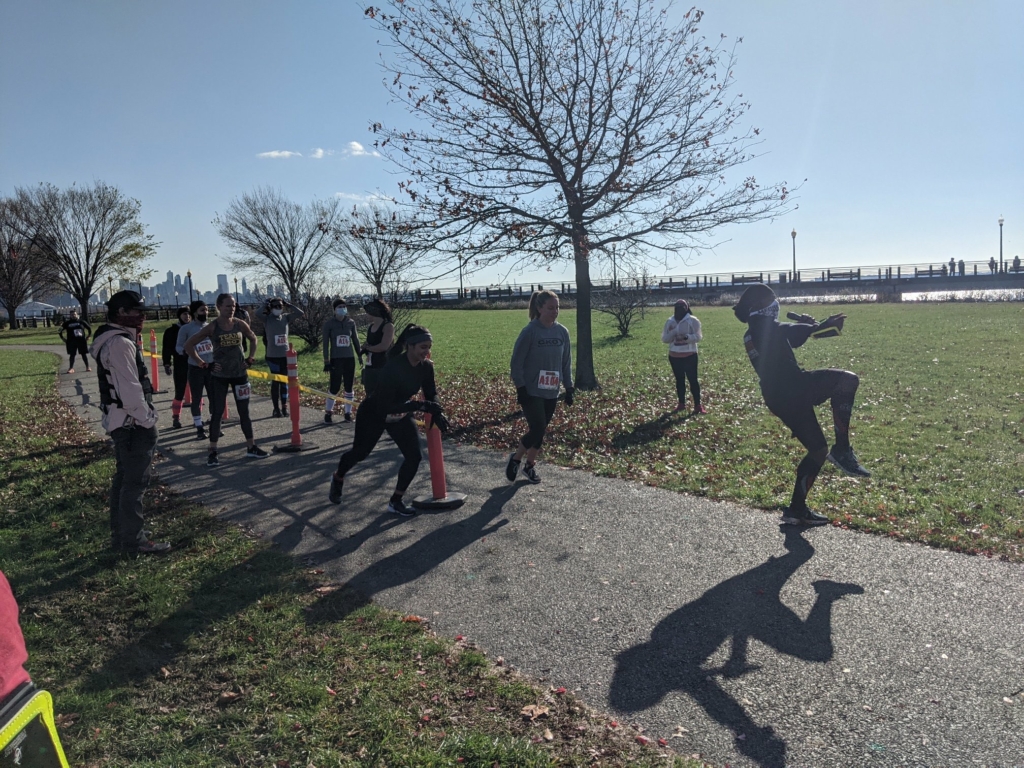 Instead, some of those historic views were blocked by 8-foot walls, rope climbs, and A-frame obstacles.  The back-to-back heavy carries at the halfway point were killers.  I don’t run with weight so those two walks not only restored my heart rate, they also seriously slowed me down.  After those, it was an all-out sprint to the finish.  It was a chip-timed race.  I had my son in sight for most of the back half so I knew I was doing well.  He runs a five-minute mile.  I’m nowhere close to that so we both knew my obstacle strength advantage would keep us close.  In between us was our buddy Rich who trains with us at home. 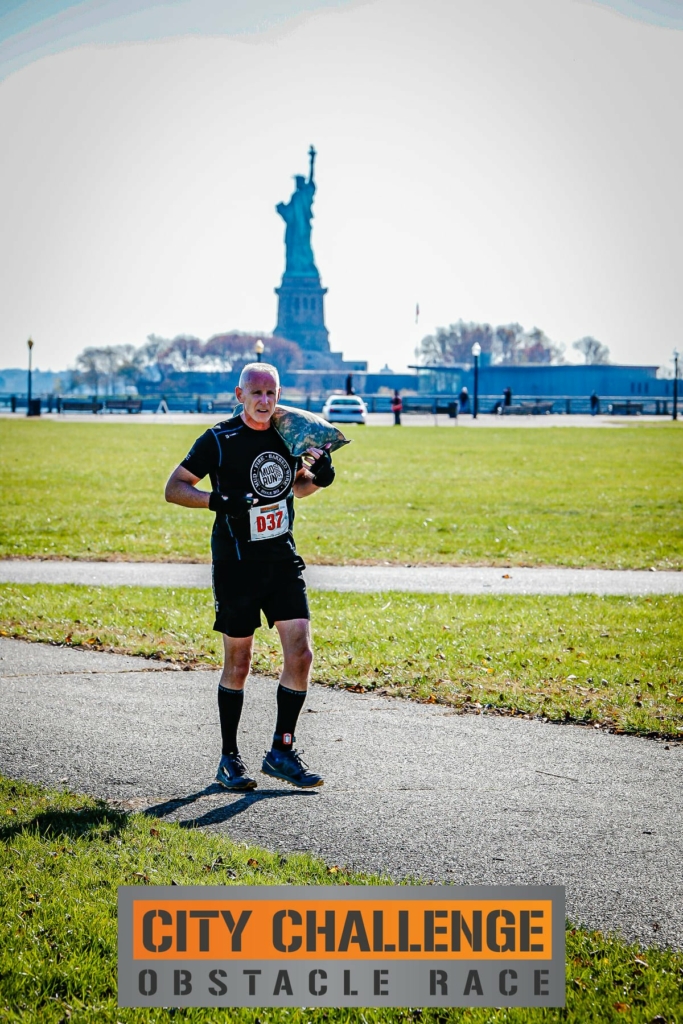 Sandbag carry with a view

I wore my Altra Lone Peak 2.0 sneakers not knowing the course was flat, fast, and either paved or cinder trail.  The “Flat Tires” heavy tire flip was the only obstacle on grass.  Torrential rains during the week made that one a muddy mess.  I loved it.  If Elvi ever has a race down here in Philly, he can add potholes and open gushing fire hydrants to the realism of city street racing. 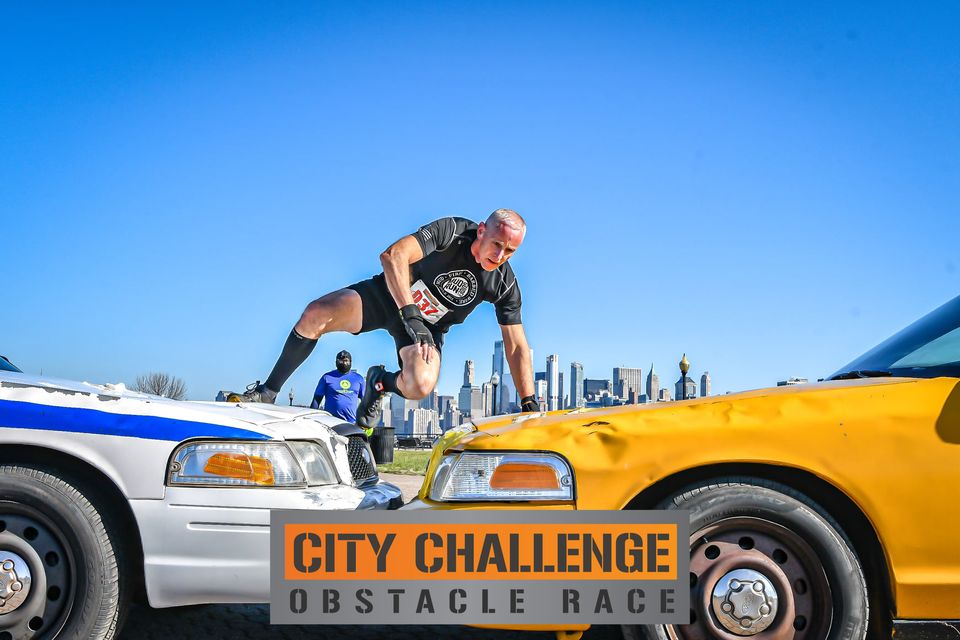 There were no issues with obstacle backups.  I was able to solo just about every one of them.  Which was nice so I could work on some technique and fun stuff like flipping over the A-frame.  As one of the older guys out there, it’s a kick to see and hear the reactions of little kids watching.  While some struggle with the walls, I muscle up and over.  Then of course there’s the elites who simply sail over effortlessly.  Always a pleasure to see them vault.  It’s a gutsy technique I’m still learning. 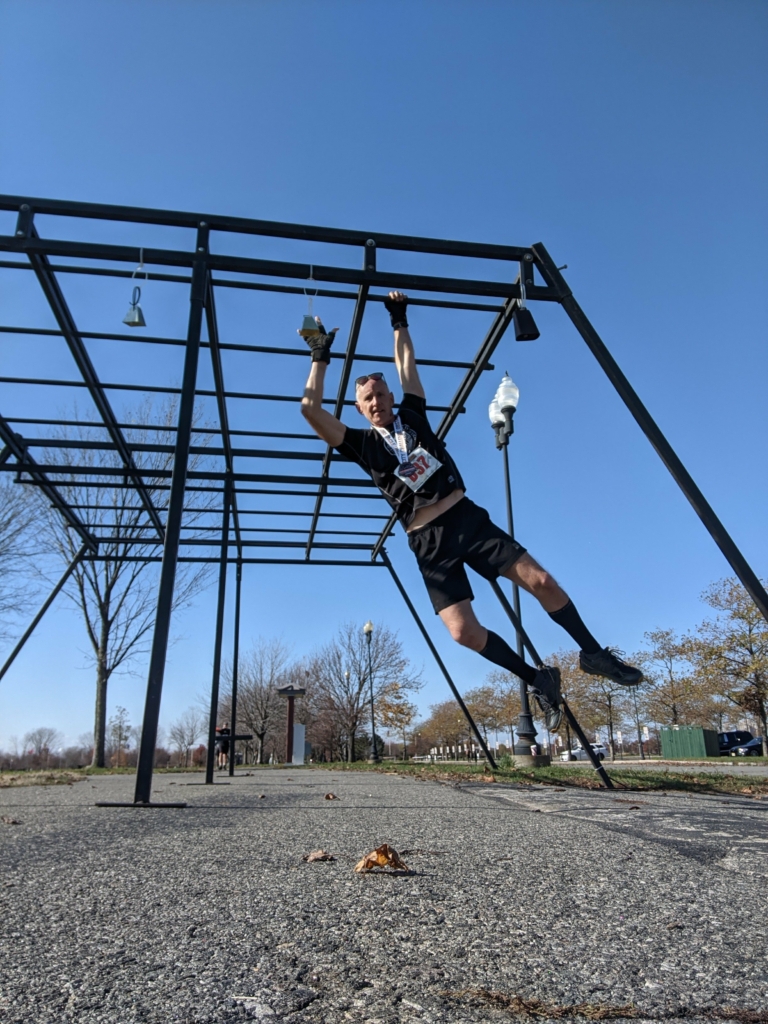 Nevertheless, my new speed earned me the goal I was after.  Second place age group (50-59) for me and third place AG (20-29) for my son.  While podiums were only for the top three elites at this race, I did what I set out to do this year.  Next year I will get that bling.  Will it be Palmerton?  A Stadion?  I don’t know.  But it will happen. 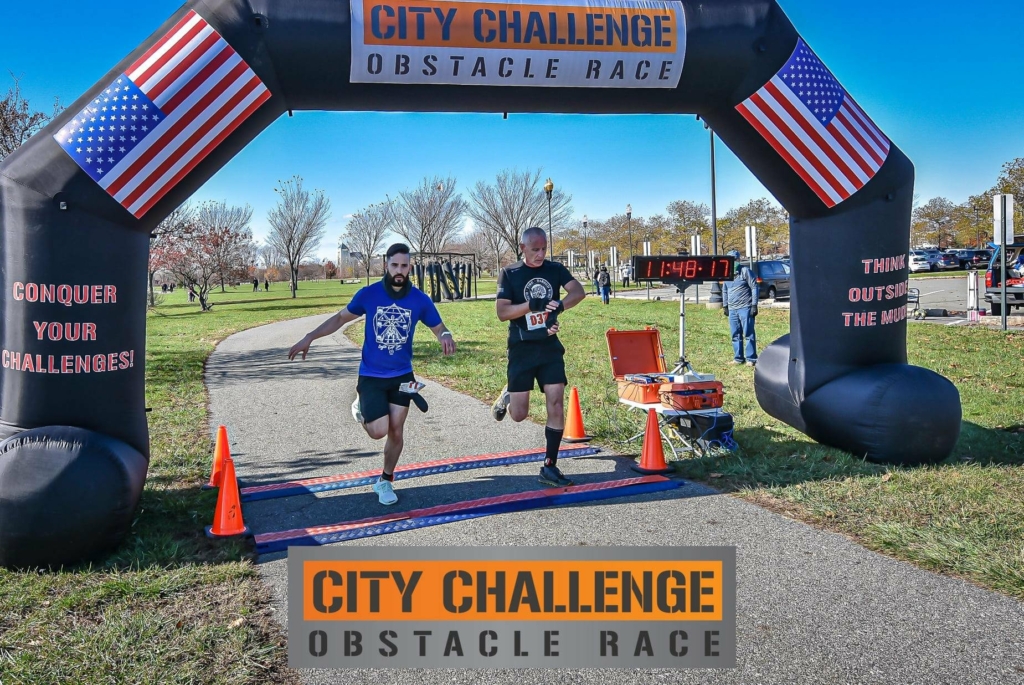 Didn’t know it was a race!

For going above and beyond, for putting on a first-class race, for making everything so well-organized, and for all those awesome views, Mud Run Guide awards Elvi Guzman and City Challenge Race 5 for 5 stars.  I also give 5 stars to Justin T. Manning for giving me and Mud Run Guide that awesome shout out at the starting line.  Thank you, gentlemen.  You saved 2020 for me.