Skip to content
Posted in eLearning By michaelgPosted on July 6, 2020Tagged eLearning 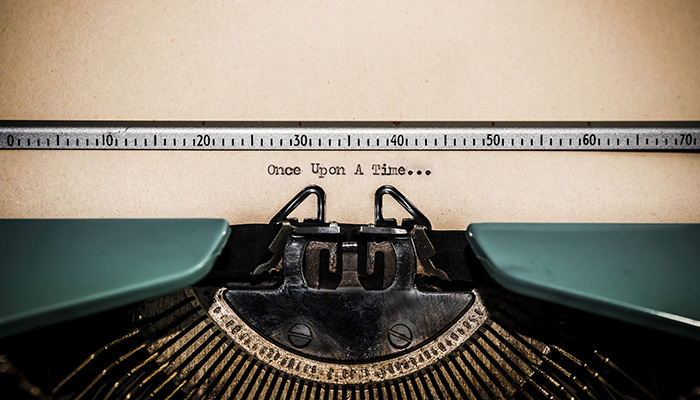 Last year I worked on a major project to develop online courses for HR professionals. Most of the content was aimed at influencing behavioural change so, as the principal writer, I decided to major on storytelling as strategy for learning. Over a six-month period, I reckon I must have written hundreds of stories, some no more than simple prompts for reflection and discussion, while some formed the primary means for uncovering ideas and generating insights.
Reflecting on how central storytelling had become so central to my approach to learning design, I thought back to the point at which I really became hooked on this technique. Back in 2003, I devoted a great deal of energy to the design of a new CD-ROM course entitled Ten Ways to Avoid Death by PowerPoint. In blatant disregard of all the usual constraints of time and budget, I set out to design a programme that was both highly interactive and media-rich, engaging as many of the senses as possible.
As the course was nearing completion, I came up with the idea of introducing the programme with a short story, adapted from a classic fairytale. Because the moral of the tale seemed to echo the main message of the course, I added this in, even though I was concerned about starting a course in such a passive, linear manner.
Some time later, I met with a colleague who had been reviewing the course. She had shown it to several managers in her company and got some feedback. I asked if anything stood out that they found particularly enjoyable or memorable – perhaps the games, the multimedia, the illustrations? No, you guessed it, it was the story. It made the point, it stirred the imagination, it stuck in the mind.
You may not be surprised, but I was. Can stories really be more powerful than interactivity in bringing about learning? I investigated further and found a site called storyatwork.com (it’s long since disappeared). They said: “We are story-making machines. Cognitively speaking, every experience, every relationship, every object is stored in the mind as a story.” OK, but any website that calls itself ‘story at work’ is going to be biased. What about the science?
Well, Jerome Bruner, the father of cognitive psychology, believes storytelling is hardwired into our brains. The primary reason infants are motivated to learn to speak is because they have stories inside them that they want to share with others. Simple stories like “I fell over” or “I had a bad dream and I’m scared”, but stories nonetheless.
In his book Tell me a Story, psychologist and artificial intelligence expert Roger Schank argues that “knowledge is stories” and that intelligence may be more or less equated with the ability to tell the right story at the right time. Even the old-timers agree. According to the old Hopi proverb, “He who tells the stories rules the world”. Hollywood already knows that.
When you attend a really good workshop, the one thing you can guarantee is that the facilitator will have some good stories. Perhaps a few are just good jokes, but many will be extremely relevant to the subject in hand. They illustrate a point, they stimulate discussion. That’s why it’s so much more difficult to run a workshop for the first time – it can take quite a while to come up with all those anecdotes and examples that bring the event to life. It also explains why your average facilitator’s guide is never quite enough of a foundation on which to run a workshop – however thoroughly it lists all the steps involved in preparing and running the event, it’s inadequate if it doesn’t also provide you with a repertoire of interesting and illuminating anecdotes.
There’s a clue here as to why so much self-directed learning is dry and boring. The typical designer will work with a subject expert to define the learning objectives and list the important learning points. They will structure this information and support it with visual aids and practical exercises. If they’re not careful, what they will end up with is the online equivalent of the facilitator’s guide, when what they should have done is spend hours in conversation with the subject expert, wheedling out their favourite stories on the topic – the successes, the horror stories, the amusing incidents.
Even if you don’t fancy yourself as a budding chat show host, you are unlikely to encounter much opposition. Subject matter experts will find it much easier to tell stories than to articulate what they know in terms of neat and tidy abstractions. Funnily enough, learners won’t be any different. Try as you may to come up with clever mnemonics to help them remember the five stages in this, or the seven elements in that, they’re much more likely to recall the tales you have told or the experiences shared by other participants. They’ll also waste no time in passing these stories on to their colleagues. After all, they’re only human, and if the scientists are to be believed, simply story-telling machines.

The learning professional as storyteller