Posted in eLearning By michaelgPosted on July 4, 2022Tagged eLearning

The Renaissance (1450 – 1600) marked the flowering of culture, science and ideas about the nature of humanity that occurred in Europe, starting in Italy, spread throughout Europe. Characterized by philosophy, art, architecture, and literature, the Renaissance was a cultural revolution fueled by wealth from trade and new technology, along with political consolidations. It began in Italy in the 15th century (the “Quattrocento”) where the wealth banking family, the Medicis, became great patrons of art and learning.

How did the philosophical ideas of Humanism reinforce the cultural and scientific revolution of the Renaissance?

See:  The Philosophical Foundations of Humanism

During the Middle Ages, Aristotelianism reigned. It was a nice, orderly way of thinking of the world. Everything was in its right place, and there was always balance, equilibrium, and symmetry. Perhaps nowhere was this more evident than in Aristotle’s book, Categories, from his Organon. The Renaissance embraced the structure and symmetry of Aristotle as a way of creating beauty, instead of enforcing order in the world and structure, as it was used in the Middle Ages. The renewed emphasis on the philosophy of the Classics allowed investigation into representation of the phenomenal world, which is to say during the Renaissance, it was now acceptable to explore the natural world, and to ask questions about his forms and functions. Finding new ways to represent the natural world was also encouraged, which meant that the Renaissance brought together art, science, philosophy in new ways. As a result, we see the development of 3-dimensional art on a 2-dimensional canvas (thanks to, for example, linear perspective converging on a vanishing point where there are orthogonals, such as large tiles in the floor in a painting). 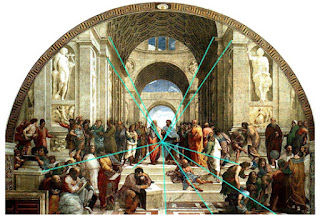 Read: Defining Humanism in the Renaissance

Overview: Humanism represented a change of focus. Instead of simply seeking to define the right place of everything within a rigid hierarchy, Renaissance thinkers began to focus on the human being, and human potential for achieving great things, and finding a moment of unity with the good and the beautiful. There was a renewed interest in the philosophical writings of the ancient Greeks, primarily Plato and Aristotle.  In addition to exploring the philosophy of the Classics, the Renaissance thinkers also studied their buildings, sculptures, and other works of art.

Petrarch: Considered the key philosophical figure in the Renaissance, Petrarch, who was Italian, was driven by the idea of the quest for the ideal. For Petrarch, there was no conflict between realizing human potential and having religious faith. Petrarch was very interested in the ancient Greeks and Romans, and the classics, not just in terms of art and architecture, but also poetry, philosophy, and lost works. He invented the sonnet form, and he wrote love poems for Laura, although he had very little real contact with her in real life. His poetry and prose championed realism and empirical knowledge.

Giovanni Pico della Mirandola: His “Oration on the Dignity of Man” is considered the Manifesto of the Renaissance. Pico resurrected humanism of ancient Greek philosophy, including Aristotle and Plato. His ideas mainly based on Plato. Through mental struggle, ascends great chain of being towards the angels and communion with God – unity which is very Platonic.

Thomas More:  Wrote Utopia, an example of an ideal world which represents humanistic philosophy. In it, each person has a place in society that corresponds with their true nature and abilities, and there is communal ownership of property.

Montaigne:  Michel Eyquem de Montaigne, Lord of Montaigne, was one of the most important philosophers of the French Renaissance.  His essays were explorations of his own thoughts and attitudes, and he mulled over the prevailing philosophies and reflected upon the novelties of the times, such as the tales of travel in the Americas.

Luther: Faith and the Individual

Martin Luther, a German professor, was famous for his “95 Theses” which rested on the main concepts that the Bible is the core authority and that individuals can be saved (achieve salvation) only by faith and not by deeds. The “95 Theses” were published in 1517, and unleashed the Reformation, a religious schism which broke with the Catholic Church and repudiated the pope’s authority, rejected the validity of the sale of indulgences. Instead, he promoted “The Priesthood of All Believers.” Luther was excommunicated in 1521 at the Diet of Worms, after which he used the printing press to create pamphlets that explains the new doctrine.

Calvin:  Break Away from Hierarchy

John Calvin, a French Protestant, believed in predestination and the omnipotence of God. Calvin was a stern believer in the power of God’s word and the responsibility of individuals to learn to read the Bible directly and to obey the word of God, without intermediaries (priests, bishops, etc.).  The core concept of Calvinism is that God selects those who, through grace, are made capable of believing in God, which is the route to salvation (not deeds, or purchasing indulgences). It was very anti-authoritarian, and was not welcome among the priests, kings, popes, bishops, and others who had benefited from a belief system that gave them privilege, power, and authority.

Henry VIII, miffed at Pope Clemente’s refusal to annul his marriage to Catherine of Aragon, decided to create a religion that maintained hierarchies and the divine rights of kings, but which eliminated the Pope. That church was The Church of England, and it instantly made enemies of both Protestants (Calvinists, etc.) and Catholics. Henry VIII sought to replace both with his Church of England, and he did so by burning Calvinists at the stake for heresy, and beheading Catholics.

That was impressive! What impresses you most? Please list them.

Expand: Machiavelli’s The Prince (1532): The End Justifies the Means

Dedicated to his patron, Lorenzo de Medici, The Prince (1532, but written earlier) contains advice to the prince about how to acquire and maintain power. Much of the focus is on the psychology of the subjects, and so it is often considered a practical guide into the psychology of leadership, and the dynamic between the leader and followers.

Machiavelli first defines principalities, types of armies, and then moves into the character and behavior of the prince. Written in a pragmatic style, with a tone of scientific inquiry, some of the passages seem almost satirical, such as when Machiavelli concludes that it is better for the Prince to be feared than loved by his subjects, better to be cruel than merciful, but is a good idea to launch large projects in order to create a positive reputation. Enormously influential, but not at all an antidote to political hot water, Machiavelli was accused of conspiracy and tortured in 1513.

Later, Machiavelli wrote The Prince as well as historical and literary works.  The main point of The Prince is that almost any tactics can be justified in achieving the overall goal (creating a stable princedom), and if the populace is treacherous, then treachery on the part of the leader is justified.  The book was condemned by Pope Clement VIII, but nevertheless became widely adopted and studied.

Francis Bacon (1561 – 1626) was determined to invent a scientific method based on experimentation rather than parsing scriptures for evidence of natural law. He wanted to bring to light all the things that were previously hidden or unknown, and to do it for the good of humanity. His most important scientific writings were in essence writings in the philosophy of science. His book, “Novum Organum Scientiarum” (The New Scientific Method) lays out procedures for scientific investigation.

Galileo:  The World Is Round, Despite Orthodoxy

1543):  Born in Poland, Copernicus was an astronomer who developed a celestial model which placed the sun in the middle of the planetary system (instead of Earth at the center). The heliocentric solar system was described in “On the Revolutions of the Heavenly Spheres.” Copernicus was considered heretical by the Roman Catholic Church.

Galileo (1564 – 1642) was convicted of heresy for his belief that the world is not flat, and barely escaped being burned at the stake, although he did spend time in prison. He was most famous for his work in astronomy and math, and his assertion that the Earth is not flat.

Discuss the ways in which humanistic philosophy found its way into science, art, literature, and philosophy. What were the similarities and differences across the areas of study?

1.  The great patron of the arts in Quattrocento Italy was

d) Pantagruel, as chronicled by Rabelai

2.  Machiavelli asserts in The Prince that mercenaries are

a) essential for defense

b) dangerous and can leave one vulnerable (correct)

3)  Copernicus devised a heliocentric planetary model which asserted that

a) the moon was at the center, and the “Prince of Tides”

b) the planets have moons, and the moons are sometimes more important than the planets themselves

c) the sun is at the center, and the planets rotate around it (correct)

d) the earth is flat

4)  Humanistic thought in the Renaissance includes all except the following:

a) a return to Classical models

b) the human being has infinite possibilities of self-actualization

c) human accomplishment should be celebrated, and it brings together science, literature, politics, architecture, art, and more

d) Literacy is dangerous and all serious works of science, politics, and literature should be written in Latin (correct)

Heliocentric planetary system: developed by Copernicus. The planets rotate around the sun.

Reformation:  The reaction and reorganization of the church based on Martin Luther’s 95 Theses (written in 1517) which criticizes the Roman Catholic Church.

Petrarchan sonnet: a sonnet form popularized by Petrarch, consisting of an octave with the rhyme scheme abbaabba and of a sestet with one of several rhyme schemes, as cdecde or cdcdcd

Elizabethan sonnet: a type of sonnet much used by Shakespeare, written in iambic pentameter and consisting of three quatrains and a final couplet with the rhyme scheme abab cdcd efef gg.

Vanishing point: the point at which receding parallel lines viewed in perspective appear to converge

Linear perspective: a type of perspective used by artists in which the relative size, shape, and position of objects are determined by drawn or imagined lines converging at a point on the horizon.

Orthogonal line: A related term, orthogonal projection, describes a method for drawing three-dimensional objects with linear perspective. It refers to perspective lines, drawn diagonally along parallel lines that meet at a so-called “vanishing point.” Such perspective lines are orthogonal, or perpendicular to one another.

Upon successful completion of this lesson, you will be able to

1. Define humanism in the Renaissance

2. Explain the political philosophy of Machiavelli in The Prince

5.  Describe utopian writing in the Renaissance and its impact

Grotius.  The Rights of War and Peace. http://www.gutenberg.org/ebooks/46564