Skip to content
Posted in eLearning By michaelgPosted on January 21, 2019Tagged eLearning

There are different ways to look at the Christmas card sent out by newlyweds Prince Harry and Duchess Meghan Markle.
If you have not seen the card or the image, it is of the newly married friends and his wife, the new Duchess, standing on the edge of a pond and looking at a fireworks display so immense it covers the entirety of the sky. 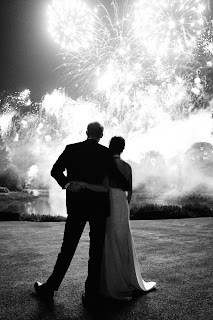 There is so much smoke in it that you can’t really see the points of light and ornate formations that you might see at a Fourth of July fireworks display. But the smoke to acts as an eliminating cloud so one feels that one is either transported into the heavens or looking into the jaws of apocalypse
And that duality informs everyone’s interpretation of the image.
The most innocuous of the interpretations is the idea that you are sharing the joy of the new couple and that the way that the landscape and skies appear parallels their internal landscape.
That, too, has its duality as they either feel joyous eruptions of life changing chaos or grinding raw fear of the battlefield. One cannot help but think that think that the smoke and rockets red declare look a lot like a firefight or mortar attack in Afghanistan. Harry is a veteran of Afghanistan and used to being on the battlefield and not in the air, since he was a soldier in the Army.
And, I know that many Marines and soldiers who went through combat in Afghanistan do not enjoy fireworks. So, it seems rather odd to see that Harry might actually be enjoying that scene. I would imagine that if it does reflect his interior landscape, it is one of raw fear that he then attempted to blot out, self-medicate, and avoid the great enemy, sleep.
There is a flip side, of course.
A more common interpretation of the people who voyeuristicly enjoy anything having to do with a glimpse of the inner workings of the royal family is that they want to see the royal family acting like normal folks and inviting them in two their living rooms or a play date where they wear hand-me-down sweaters and kick up their heels in a woodsy setting.
I think that to reduce the royal family to regular folk is to reduce their ability to affect great change in society and, especially in these moments after Brexit – the exit of Britain from the European Union.
It marks a moment for Britain to strengthen the Commonwealth. To do that requires the Machiavellian scheming of an Elizabeth I or the boundlessly ambitious Plantagenet houses of Lancaster and York. It doesn’t need a “Hey, come hang out with us!” approach.
But those who like to voyeuristicly insert themselves or feel titillated by vicarious intimacy or invasions into privacy of the royal family have the feeling that with backs turned, Harry and Meghan are perhaps communicating that they are cold, unfeeling, and are profoundly indifferent.
Having one’s back turned communicates a message that always has two sharp edges just like Melania Trump’s message to the world with her “I don’t care coat” as she was going to visit the boder and the scene of tragic separations of vulnerable children and their mothers.
If the idea of backs turned means that you’re not invited into their inner world, if their inner world includes either joy or apocalypse or battlefield horrors, you should thank your lucky stars that you have not been invited into that.
At any rate, it’s a photo with many conflicting and contradictory interpretive possibilities, and we just cannot know with certainty.
What we do know is that with Britain’s exit and the continuing disintegration of the Royal Family’s impact and relevance, something powerful needs to be done.
It’s a leadership, and not fraternity or confraternity. Leadership in history has usually been ugly and not necessarily in the right direction.
Think of Henry VIII. I remember visiting a Cathedral in Bury St. Edmunds that contained the ruins of an abbey destroyed by Henry VIII. To be honest it was one of the saddest and most gripping feelings I have had and I imagine it is similar to going to places where beautiful works of architecture or sculpture have been destroyed because they were unfortunate symbols of an ideology and a group of people who needed to be exterminated at least from the perspective of the usurpers.