Skip to content
Posted in eLearning By michaelgPosted on February 11, 2019Tagged eLearning 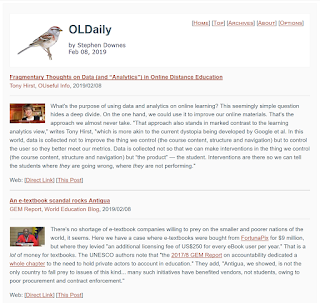 OK, before you panic, I’m not thinking of quitting OLDaily. It’s not that kind of post.

When I changed email providers a few months ago I lost a lot of readers and my totals never did recover. (*) Nor am I being invited to speak at conferences any more. I feel pretty good about what I’ve done over the years and so I’m not having a crisis of confidence or anything like that. But it does raise some questions in the back of my mind.

Partially, it’s a generational thing. There are some fantastic new voices that have emerged over the last decade or so that need to be heard. Add to that the fact that more and more marginalized voices are being heard, which again is terrific. These voices are occupying center stage now, as they should.

But it’s not just that. I wrote on Mastodon a few days ago, “I’m not sure anyone has any status in online learning any more. I’m wondering, maybe it’s not even a discipline any more. There’s learning analytics and open pedagogy and experience design, etc., but I’m not sure there’s a cohesive community looking at what we used to call ed tech or e-learning.”

And I think there’s something to that. As I was preparing posts for OLDaily yesterday today I was thinking about the wide range of topics and issues covered:

Now none of these is a topic that is not a part of educational technology. When we go back (say) to the territory I mapped out in The Future of Online Learning (1998) and the original About OLDaily page (2001), all of these fit naturally into place. And another dozen, and another dozen.

In 1999 you could specialize in HTML, CSS and Javascript. In 2019, that’s almost impossible. This simple set of three specifications has become a proliferation of standards and technologies, everything from CSS preprocessors (like LESS and SASS) to website package managers like Bower and Webpack to backend frameworks like Node.js to packages like Angular, Vue and React. No name only a few of the many pathways you can follow.

Each part of educational technology has become similarly complex. The humble LMS began as a content management system, then integrated into student information systems (SIS) and management information systems (MIS). Then the content was organized into simple sequencing and content packaging, before evolving into learning design. Meanwhile, to work with multiple technologies we needed learning tools interoperability (LTI), and this needed to work with learning analytics and learner record stores (LRS) using the experience API (xAPI), formerly called Tin Can.

That’s just the technology side. On the part of social, cultural and theoretical knowledge, we’ve had similar combinatorial explosions. We used to be able to speak of K12, post-secondary and corporate learning as distinct and well-defined categories, but with Ed Reform in the U.S. K-12 became mired in a host of issues, while post secondary education was dealing with everything from blended learning to e-learning consortia to stackable credentials.

I could go on – and, of course, the whole point of this post is that I could go on and on and on. The first was challenging enough in the 1990s, but today there is no field any more. People have specialized into their own discipline, their own subfield, each with its own community, its own professional network, and its own way of seeing the world.

And I’ve never been good at normal science. I don’t burrow down into a specific discipline and look for problems within a standard framework. Look at AI today, and that’s what defines the field – it’s so normalized that there are standard problems, standard data sets, and competitions for the best algorithms (judged by standardized criteria) against these. From a certain perspective, these are no different from the learning technology competitions pioneered by people like Brandon Hall a decade or more ago.

I’m not sure we’ve had our Kuhnian moment in education yet. As Jenny Mackness pointed out in her post earlier today, we’re still “tinkering with the system” in education. As she says, quoting McGilchrist,“we focus on practical issues and expect practical solutions, but I think nothing less than a change of the way we conceive what a human being is, what the planet earth is, and how we relate to that planet, is going to help us.” I can’t count how often I’ve been asked to write or talk about the “practical implications” of my work, as though you could take connectivism (say) and simply apply it to yet another midwesten college psychology class and get improved test scores.

And I think now that a couple of things are true. One thing is that people have a certain amount of tolerance for talk about epistemic revolutions, and at that point they declare that they’ve had enough. We’re living in an age of Trump and Brexit and blockchain and global climate change and the ascendancy of China and the very real possibility to total economic collapse, and the patience of people tinkering with the foundations of society has run out.

And the other thing is, you only get to declare one epistemic revolution in your lifetime. Even if you see your view of things co-opted, or misinterpreted, or even if it’s wrong and you need a few revisions (like Wittgenstein did, like Kuhn did), you don’t get any do-overs. An epistemic revolution is a generational change thing, it’s not a road-to-Damascus thing. People don’t ‘convert’ to the new way of seeing the world (prophets (and there are many) notwithstanding).

I’ve used up both. People don’t want to hear how the system should be saved any more; they’re too concerned about preserving what they have. And I don’t have a second message – I’m not going to become (say) a learning analytics guru, because I’m just too interested in all the other bits of our now-very-complex discipline, and I’m not going to let them go.

Which gets us back the the question of why I can count my appearances on one hand. The work I’m doing isn’t serving anyone at the moment. It’s like those early days, when I was learning to be a philosopher. I was too young to change then, and I’m too old to change now.

So what is the value of OLDaily? I don’t know. In one sense, it’s the same value it always had – it’s a place for me to chronicle all those developments in my field, so I have a record of them, and am more likely to remember them. And I think it’s a way – as it always has been – for people who do look at the larger picture to stay literate. Not literate in the sense of “I could build an educational system from scratch” but literate in the sense of “I’ve heard that term before, and I know it refers to this part of the field.”

Am I OK with that? It doesn’t matter. It’s out of my hands. I’m just happy to be doing it, offering whatever service I can with a smile and a song in my heart, and I’m going to continue to work as hard at it as I ever have.

What is the Value of OLDaily?