Skip to content
Posted in eLearning By michaelgPosted on February 25, 2019Tagged eLearning

Learning what voting and citizenship can be fun when children can engage with a colorful, accessible book which encourages creativity and interactivity. Welcome to an interview with Sean Callahan and Russell Glass, authors of Voting with a Porpoise. 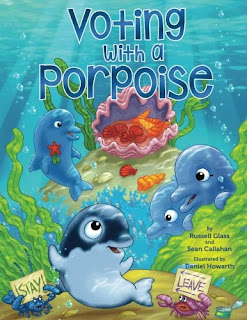 1. What is your name and background?

Sean Callahan is a content marketer at LinkedIn. He has written several books including The Leprechaun Who Lost His Rainbow, A Wild Father’s Day and co-authored The Big Data-Driven Business. His journalism work has also appeared in The New York Times, The Washington Post, and Notre Dame Magazine. Callahan lives with his wife and two daughters in Chicago. He is also a voter.

Russell Glass is a serial technology entrepreneur and author, having founded or held senior positions at four venture-backed technology companies and co-authored of The Big Data-Driven Business. He is currently the CEO of Ginger.io, an on-demand behavioral health company, and a board member of Rock the Vote where he uses his experience with technology, data science and narrative branding tactics to develop unique strategies to increase engagement and turnout among young votes. He is also a voter. 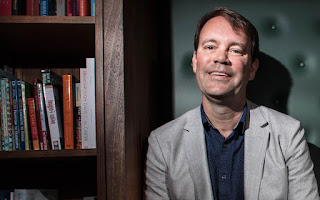 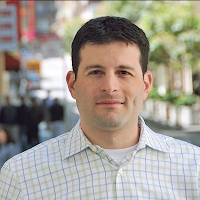 2.  What is Voting with a Porpoise?

Voting With a Porpoise is a children’s book in which the voting process is brought to life for children of all ages. While kids giggle over dolphin pod leader Finn and Petey the Porpoise, parents are reminded just how vital voting and civic engagement are for a healthy democracy.

3.  What inspired the book?

We know that young people are voting at significantly lower rates than people over 65. So we wanted to go to the next generation of voters to speak directly to them about the power that their voices can have if they chose to use them, and make voting something they feel empowered to do and positive about from the start. We wanted to find a project that we were both passionate about.

Sean and Russ, see above.

5.  What are some of things you’d like to change in society?

The biggest change we’d like to see in society is more people voting. We want to change the culture around voting in the United States. We’d like to see more locales adopt the law that Sandusky, Ohio, just passed, which makes Election Day  a holiday. We’d like to have more early voting, to make it as easy as possible for us to vote. We’d like to see it become customary for Americans to register to vote on their 18th birthday, just like they get their drivers licenses when they turn 16 and have a beer when they turn 21. Ultimately, we’d like Americans to feel embarrassed not to cast their vote on Election Day. Primarily, we’d like to see more people, especially young people, make it to the voting booth. If a critical mass of people voted, politicians could no longer ignore them. Politicians serve those who get them elected. Right now, the people who have the most influence on getting politicians elected is their donors. But if more people voted, politicians would be forced to serve the people who elected them — their constituents.

6.  What kinds of changes are you seeing now?

We are seeing more people getting to the polls. In the 2018 mid-terms, Americans aged 18-29 showed up to vote. One statistic in particular shows the surge in young people voting: 3.3 million Americans under 30 voted early in the 2018 mid-terms — that’s up 188% over the 2014 mid-terms. Now the trick is to turn this trend into a full-fledged change in voting culture.

7. Can you recommend other books as well?
A Day in the Life of Marlon Bundo

Great comedic TV shows think alike. In this book, backed by Last Week Tonight with John Oliver, the story of Mike Pence’s rabbit, Marlon Bundo, takes an ironic turn when we discover that Marlon has fallen in love with another bunny who happens to be a boy. The book’s dedication says it all: “For every bunny who has ever felt different.”

What Can a Citizen Do?

Dave Eggers first came into the public eye with his memoir, a Heartbreaking Work of Staggering Genius. With this book, Eggers urges young people to use their power as citizens. The School Library Journal summed up this book very well: “This must-have book distills the fundamentals of citizenship into easy-to-digest concepts and emphasizes the importance of caring for others, accepting differences, and taking action to initiate positive change.” (Note that Eggers also wrote the charming “Her Right Foot,” which reminds all of us that immigration built the nation).

Teaching Children How to Be Good Citizens: Interview with Sean Callahan and Russell Glass, authors of Voting with a Porpoise