Skip to content
Posted in eLearning By michaelgPosted on April 1, 2019Tagged eLearning

Part of the mesmerizing pull of science fiction and fantasy is the opportunity to travel in the mind to a new universe and to experience what Mikhail Bakhtin referred to as “bestrangement” – that vertiginous experience of being off-balance and aware that language and languages are only loosely anchored in a correlative “other,” and that we rely perhaps more than we should on our own experience and what we have socially learned is “real” or “true.” 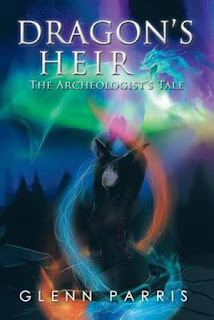 In a text, the space within the words where there is little or no comprehension of the denotation, much less the cultural meaning(s), gives a reader a feeling of extreme vulnerability due to the inability to “read” the discourse and anticipate behaviors of others.  At the same time, “bestrangement” imbues a sense of invulnerability and a sheltering psychological distance from the workaday reality that the reader may live in. It’s escape in its purest form.

The novel by medical specialist Glenn Parris, The Dragon’s Heir: The Archeologist’s Tale, begins comfortably enough in coastal Maine in a tavern. But, the conversation quickly becomes bestranging, as we become aware that Earth has had some sort of transformation and we’re either in the distant past or in the future, where there has been an Exodus Corridor, a Jing Pen, and Efilu, Nelky, and more. There are no explanations of what the terms mean, and in Chapter 1, the special vocabulary and language of the different world, continue to be developed. The narrative does not pause to explain the terms (although there is an Abridged Jing Pen Translator at the end of the book.

So, it’s a bit of work to make one’s way through the world and follow the dialogue and plot. But, as one reads, and continues to float along in a sense of being transported to another world and another time, it becomes clear that what has happened is that we’re seeing a world that is the result of a mass extinction event – the Cretaceous-Tertiary (K/T) boundary event 65 million years ago that marked the extinction of the dinosaurs, and the subsequent rise of the mammals.

Instead of being single-mindedly predatory (the gaudy, feathered raptors), the dinosaurs were highly evolved creatures with technologies that allowed them to escape the terrible conditions on Earth. In their absence, the mammals rose to power.

Now, as in the way of all diasporas, there is a desire to return to the original home. In this case, it’s also a time to find out what happened to the ancient beliefs, the culture’s leaders, and to understand the traditions. So, they launch a space ship with archeologists, soldiers, and scientists.  Vit Na, the head archeologist, is in charge.

What she finds is a culture of vile mammals who rose, as Vit Na observes, without the pressure of a predator class.  And, they have been able to run amok, undisciplined, and to develop divided, sneaky minds as they foul their own nests.

The book begins to shift tone and to be about survival and hope, and also about levels of communication and alienation in experiences of beings that have powers unfathomable by those who do not share the same ones.

In a certain way, Dragon’s Heir evokes James Joyce’s Ulysses, with a sense of wandering and extreme attention to detail. The narrative refuses to attach to a single plot or sub-plot, and the only reality that one can be sure of is the reality of the body itself. In the heroic acts (or villainous), there is a building sense of philosophy of beingness and reality. What does it take to reinvent our way of understanding the world so we have a chance of survival? Where are the ancient beliefs? What good is a mystic? What good is magic (or technology)?

As in Ulysses, the main issue is that of time travel – in other words, of memory, experience, and the uncovered beliefs and institutions of the past. What have we lost?  In the case of Dragon’s Heir, what has been lost is reborn in the heart of a reinvented heroism: Vit Na’s careful listening to all of those around her, and an awareness that learning the language and beliefs of those around her will require her to decide on her own reality, and to live in a constrained world. The “rage for order” in Ulysses is a return to Dublin, and an affirmation of the power of love, and in the case of Dragon’s Heir, an enlightened self.

The Mysteries of Dinosaur Extinction: What Really Happened? Dragon’s Heir.