So last week I was the strategy track coach for the Training 19 conference. An experiment! That meant that I picked the sessions from a list of those who put their session proposals up for ‘strategy’, and could choose to open and/or close the track. I chose both. And there were thoughts on strategy from the sessions and the attendees that are worth sharing.

I chose the sessions mainly on two criteria: coverage of the topics, and sessions that sounded like they’d give real value.  I was lucky, the latter happened! While I didn’t get the complete coverage I wanted, I did get a good spread of topics. So I think the track worked. As to the coaching, there wasn’t much of that, but I’ve sent in suggestions for whoever does it next year.

I knew two of the presenters, and some were new. My goal, again, was real coverage. And they lived up to it. Friend and colleague Michael Allen practiced what he preached while talking about good learning design, as he does. He was followed by Karen Polhemus & Stephanie Gosteli who told a compelling tale of how they were managing a huge initiative by combining training with change management. Next was JD Dillon, another friend, talked about his experiences building learning ecosystems that deemphasized courses based upon data and his inferences. Alwyn Klein made an enthusiastic and compelling case for doing performance consulting before you start.  Haley Harris & Beth Wisch went deep about data in talking about how they met the needs for content by curating.  Joe Totherow talked games as a powerful learning tool. Finally, Alex Kinnebrew pushed for finding stakeholder voices as a complement to data in making strategy. 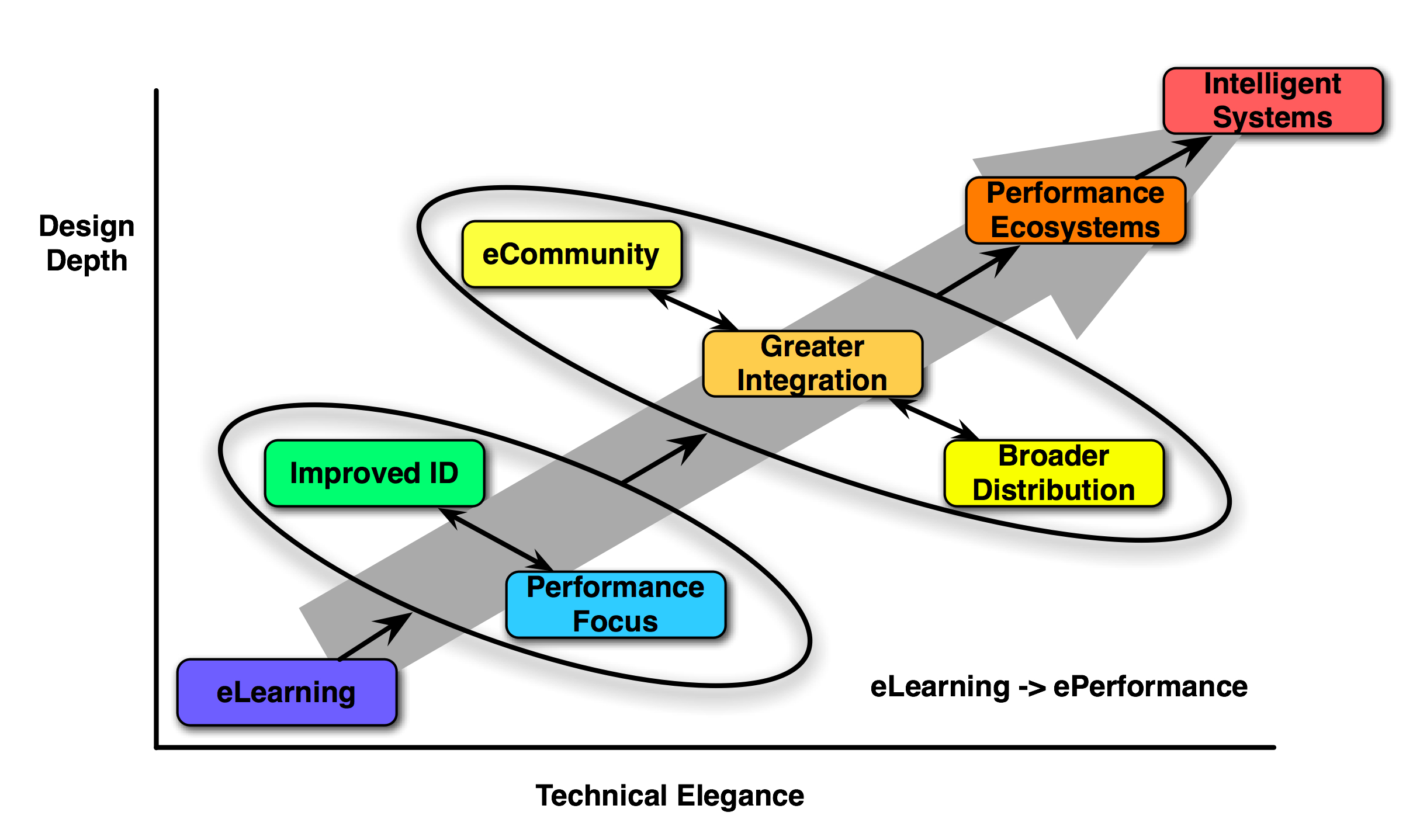 I bookended these talks. I opened by making the case for doing optimal execution right, meaning doing proper learning design and performance support. Then I talked about driving for continual innovation with social and informal.  I closed by laying out the performance ecosystem diagram (ok, so I replaced ‘elearning’ in the diagram with ‘training’, and that’s probably something I keep), and placed the coming talks on it, so that attendees would know where the talks fit. I mostly got it right ;).  However, the feedback suggested that for those who complained, it’s because  I took too long to get to the overview. Useful feedback.

I finished with a 3 hour strategy session where I walked people through each element of the ecosystem (as I cut it), giving them examples, providing self-assessment, and items to add to their strategy for that element. I closed by suggesting that it was up to them to sequence, based upon their particular context. Apparently, people really liked this opportunity. One challenge was the short amount of time; this is usually run as a full day workshop.

It’s clear that folks are moving to thinking ‘outside of the box’, and I’m thrilled. There were good audiences for the talks in a conference focused on doing training! It’s definitely time for thoughts on strategy. Perhaps, as has happened before, I was ahead of the time for the revolution. Here’s to a growing trend!

The post Thoughts on strategy from Training 19 appeared first on Learnlets.

Thoughts on strategy from Training 19